Cycling the U.S. Shoreline of Lake Superior: Choices and Challenges

Circumnavigating Lake Superior has got to rank among the top accomplishments of long-distance cycling whether you start in Canada first and proceed to the U.S. side or vice-versa. Given the closed borders due to the COVID-19 pandemic, I would venture that even cycling the length in either of the countries is a worthy talking point. The largest of the Great Lakes, Superior is truly monumental in size. 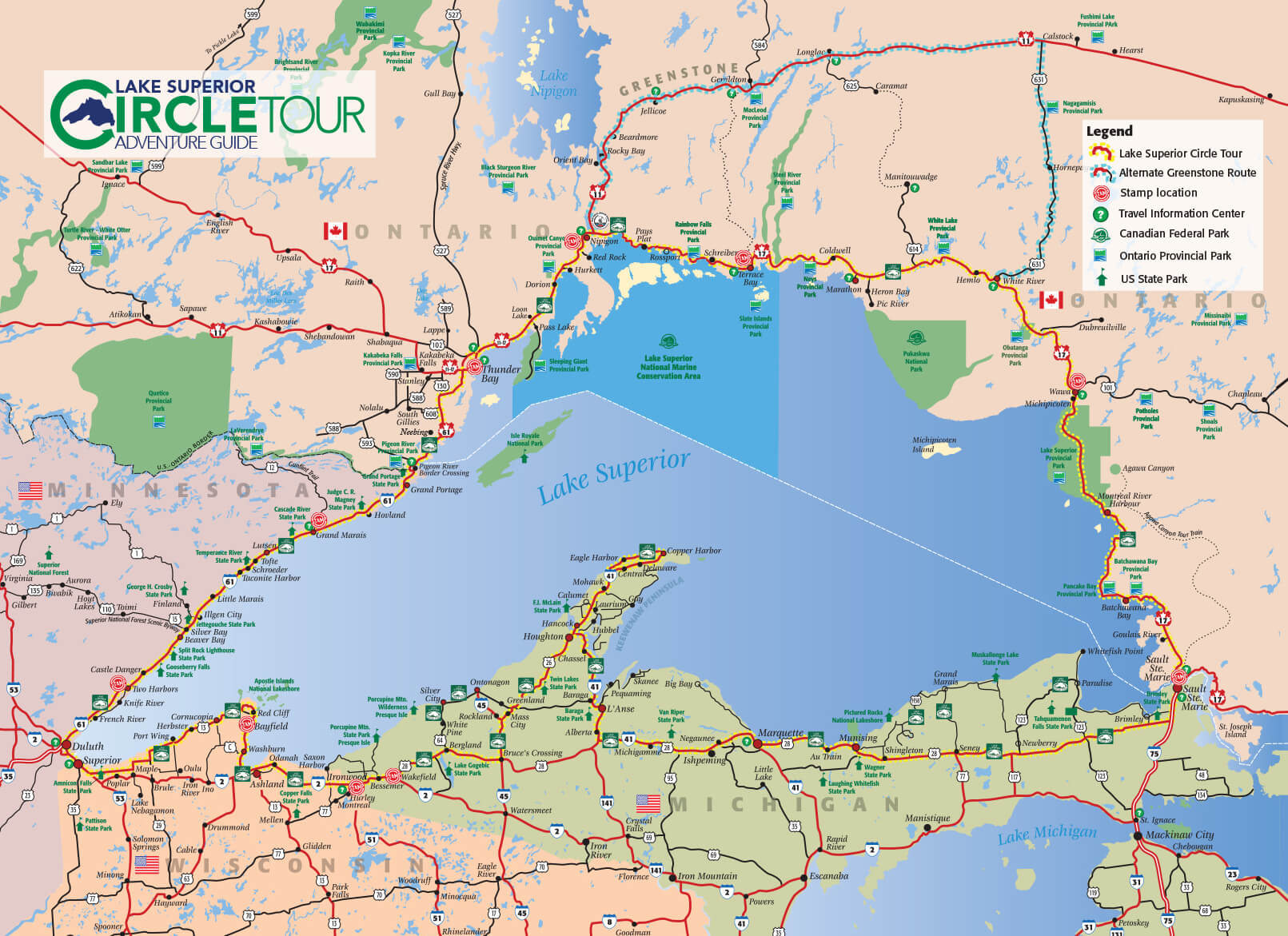 The official Lake Superior Circle Tour route is approximately 1,300 miles (2,092 km). Of this distance, approximately 475 miles (764 km) is in Canada and 825 miles (1,328 km) is in the U.S. When considering the length of the route, however, it is important to keep in mind that the official Circle Tour was designed for cars or motorcycles and not for bicycles. The distance for cyclists will vary depending on the choices and challenges one chooses. Although the route on the Canadian portion of the ride is fairly fixed – most cyclists stick to the Trans-Canada Highway (Highway 17), the U.S. route is more variable.

Cyclists can map out a route that sticks as close to the shoreline as possible or one that cuts further inland through Michigan’s Upper Peninsula. Either route provides cyclists the opportunity to immerse oneself in the distinctive culture of the Upper Peninsula (UP) and to get to know “Yoopers” a bit as the people in the upper peninsula are known locally. Cyclists with more time can choose to explore the Keweenaw Peninsula an approximately 125-mile-long projection into Lake Superior that is known for its historic copper mines, forests and stark beauty and that marks the northern-most point of the U.S. route.  Alternatively, one can bypass this area and shorten the route a bit.

Despite the distances and the challenges, cyclists of all types have successfully circled the lake from solo men and women; couples; to larger groups ranging from self-supported explorer types to more luxe ventures. Similarly, people have cycled around the lake on everything from a touring bike outfitted with panniers fashioned from containers used for kitty litter to tandems to recumbents. No matter the route or the equipment, one thing that is clear, however, is the need for planning. 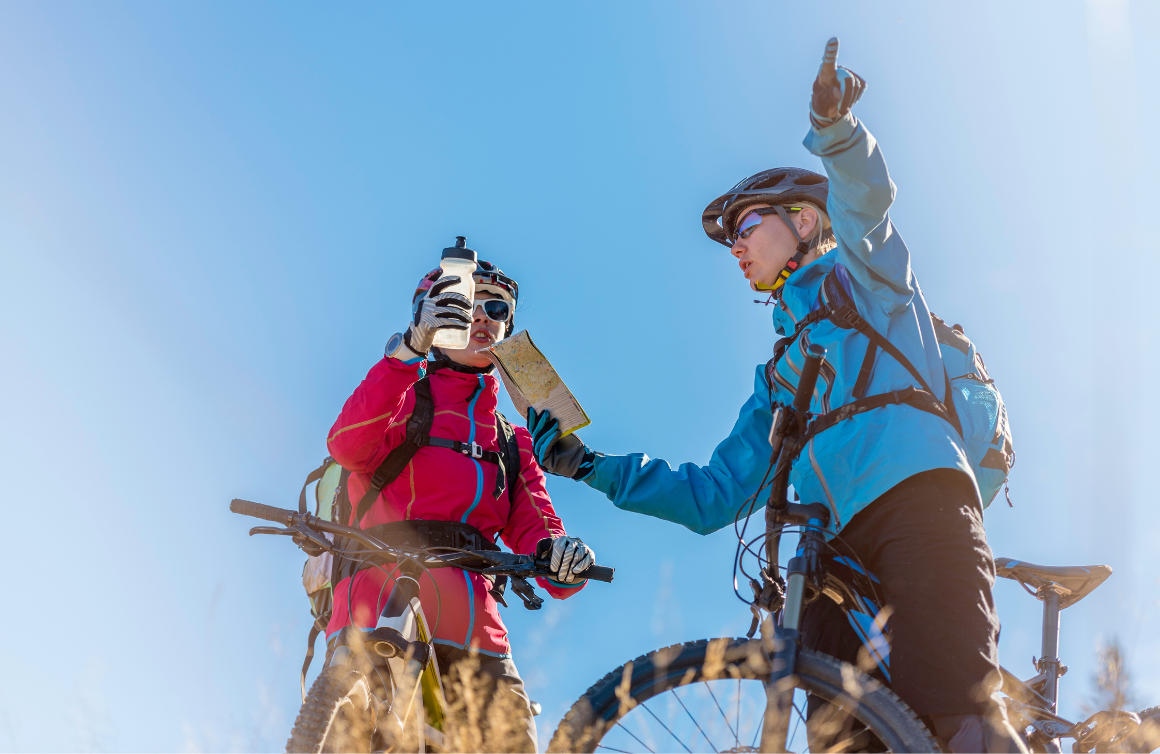 Riding around Lake Superior is not a trip that is undertaken lightly as a spur of the moment excursion. Though the Canadian route traverses more rugged landscape and is more sparsely populated, significant distances between services and variable road conditions are also part of the U.S. experience. It can also be difficult to figure out how to get from here to there and to gauge the risk involved in being on roads that are not ideal for cycling on the U.S. side as well. Therefore, mapping software such as Google Maps and Ride with GPS is the friend of cyclists on the Lake Superior route as are Internet searches for accounts of previous travelers. Utilizing the Lake Superior Circle Tour Trip Planner is also a great planning tool. It is important to remember that cell service can be spotty on the U.S. side as well. So sometimes old-fashioned paper maps can be useful. Because planning a trip around Lake Superior involves time and attention to detail, it can be an ideal way to spend long winter evenings. 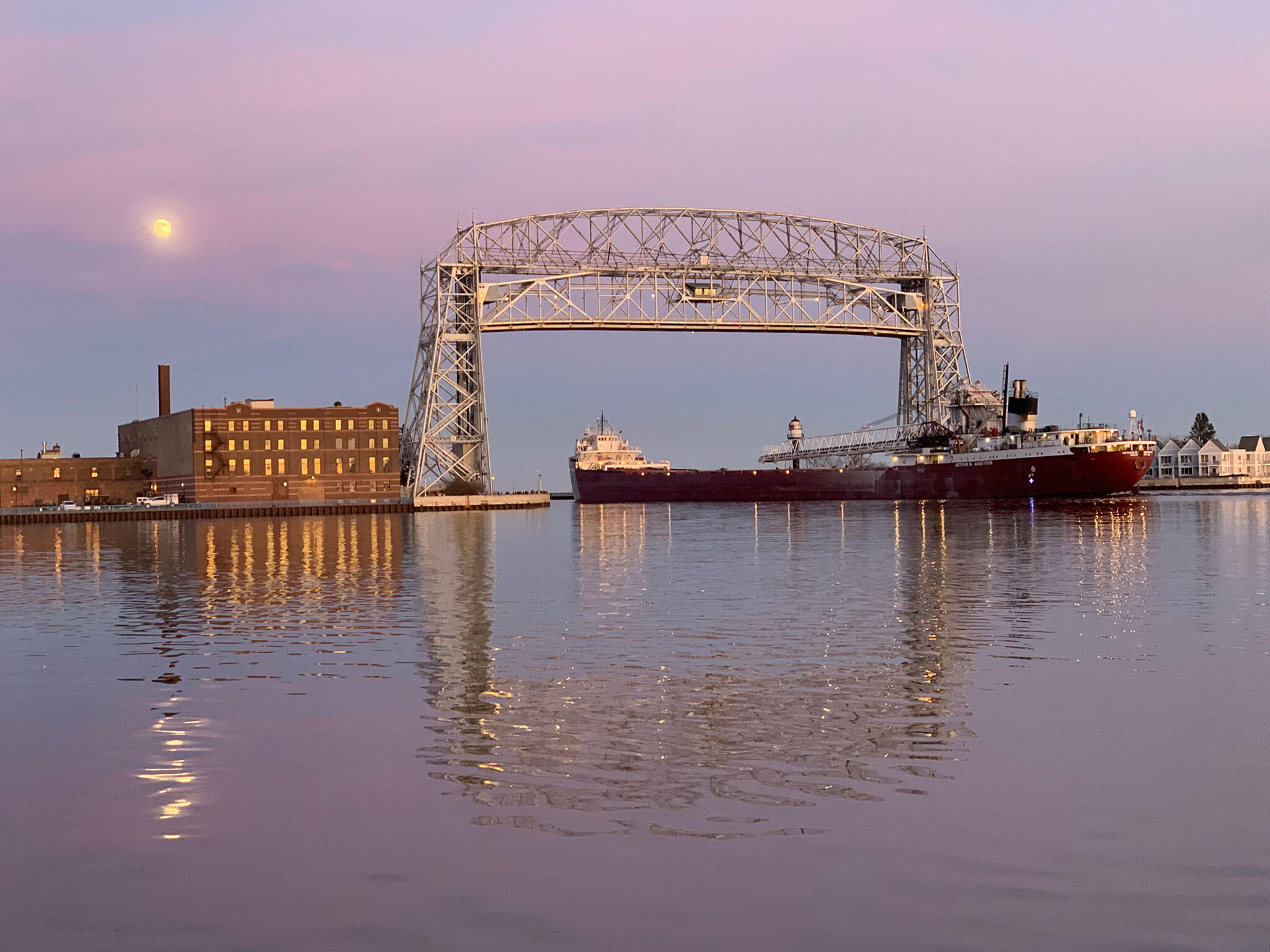 Although the shoreline is a little tamer on the U.S. side, there are many noteworthy locations worth visiting including the larger cities – the twin ports of Duluth, Minnesota/Superior, Wisconsin (populations approximately 86,000 and 26,000) and Marquette, Michigan (population approximately 21,000. Also of note are the Apostle Islands National Lake Shore, Bayfield, Wisconsin; the Pictured Rocks National Lake Shore, Munising, Michigan; the Porcupine Mountains Wilderness State Park, Ontonagon Michigan; and the scenic stretch along L’Anse Bay between the towns of L’Anse and Baraga.

The Journey Begins: Bike Wheels on the Road

Just to put things into perspective from wheels on the road, A.D. Carson of Milwaukee, Wisconsin has agreed to share his experiences in planning and leading a van-supported “credit card” group tour around the lake in 2019. After 9 months of dreaming and planning, Carson met 11 other friends in Duluth, MN in August 2019 to begin a clockwise journey around the lake.  Carson got to know most of the riders from other epic rides he participated in – eight from a coast-to-coast ride. The group included a driver who would provide snacks and sag support. With the exception of the young woman who served as the driver, the group was sixtyish. 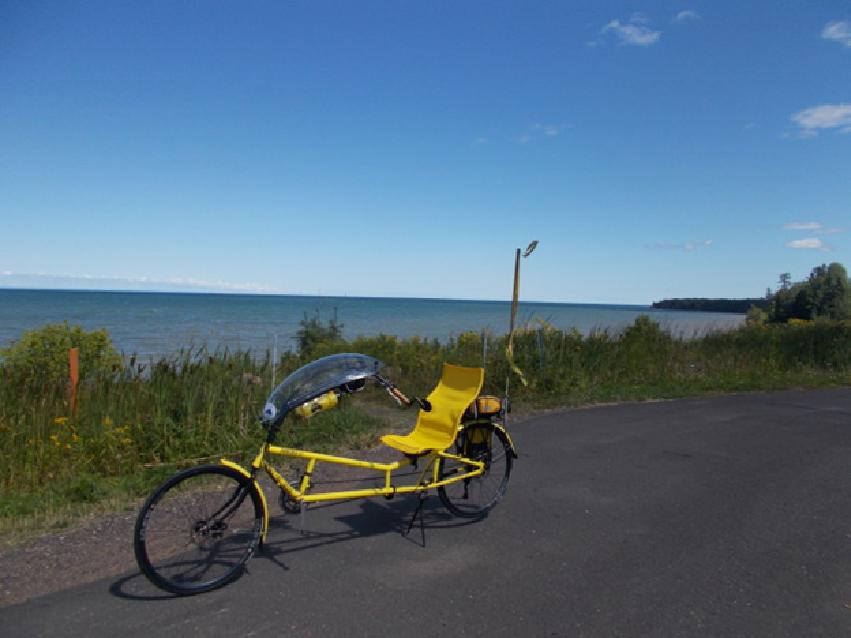 The plan was to do approximately 60 miles a day, to eat in cafes or restaurants and to overnight in motels. With most everyone on conventional touring bikes – Carson himself was on a long yellow recumbent – the group set off north on U.S. Highway 61 which parallels the lake, has an 8-foot-side wide shoulder, and moderate traffic levels in most places. For a change of pace, the group would jump onto the Gitchi-Gami State Trail, which when complete will provide an 86-mile-long paved, non-motorized route between Two Harbors and Grand Marais, MN.  The group fell into a sweet rhythm of meeting at 5 p.m. for a drink to talk over the days event and to preview the next day’s route. A group dinner followed. Three days later, the group coasted down to the U.S.-Canada border in Pigeon River and crossed into Canada one bike at a time with no problems….. 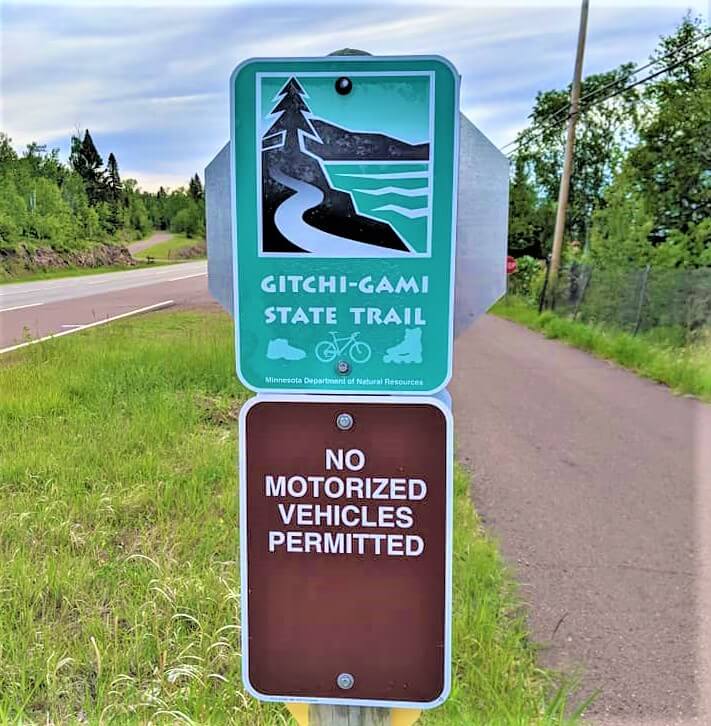 In the interest of space and to avoid duplication, this account will focus on the U.S. portion of the route….. In short, the following 11 days brought challenges, drama, weather, rugged landscapes and adventures followed before the group made it into Sault Ste. Marie, ON.  There was some walking up hills, riding in the van, dodging the weather and traffic on the Trans-Canada Highway, and scrounging around for food – the usual. But everyone was still riding, and they were still friends.

What may surprise some Canadian readers is that route finding south of the border can be just as perilous if not more so than riding the Trans-Canada Highway. Michigan 28 in particular provides a direct route between Sault Ste. Marie and Munising, MI. But the approximately 128-mile stretch is narrow, and the traffic is fast and not particularly friendly to cyclists. The scenery is not that enticing either. 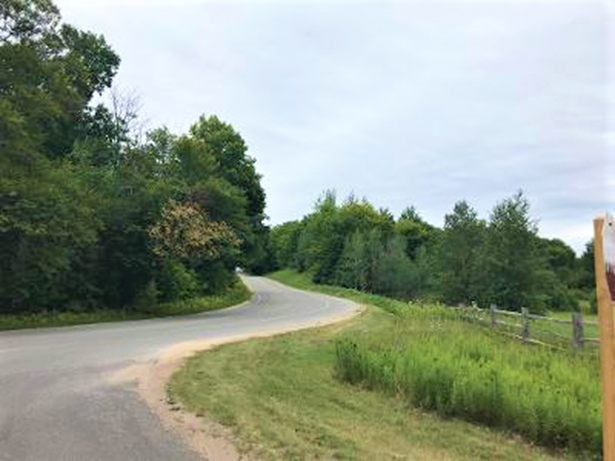 The alternative to this white-knuckle route is Michigan H-58, a very scenic and narrow route which hugs the lake in places and traverses beautiful forested expanses in other places between Deer Park and Munising, MI. The route serves as an access to the Pictured Rocks National Lake Shore. The problem with this choice is an approximately 19-mile stretch of this road immediately to the east of Deer Park near Muskallonge Lake State Park, which is a sandy and gravely obstacle to touring bikes – and even some passenger cars. As of this date, there seems to be no motorized portage to cover this this gap. Hardy riders make their way through with a combination of riding and walking. Carson’s group chose Michigan 28. In the end, this was the biggest safety concern of the entire ride.

After the group reached Munising, the group got a reprieve from the road and took a day off in “tourist land” and enjoyed a boat ride to view the Pictured Rocks. The rock formations can only be seen from the water. 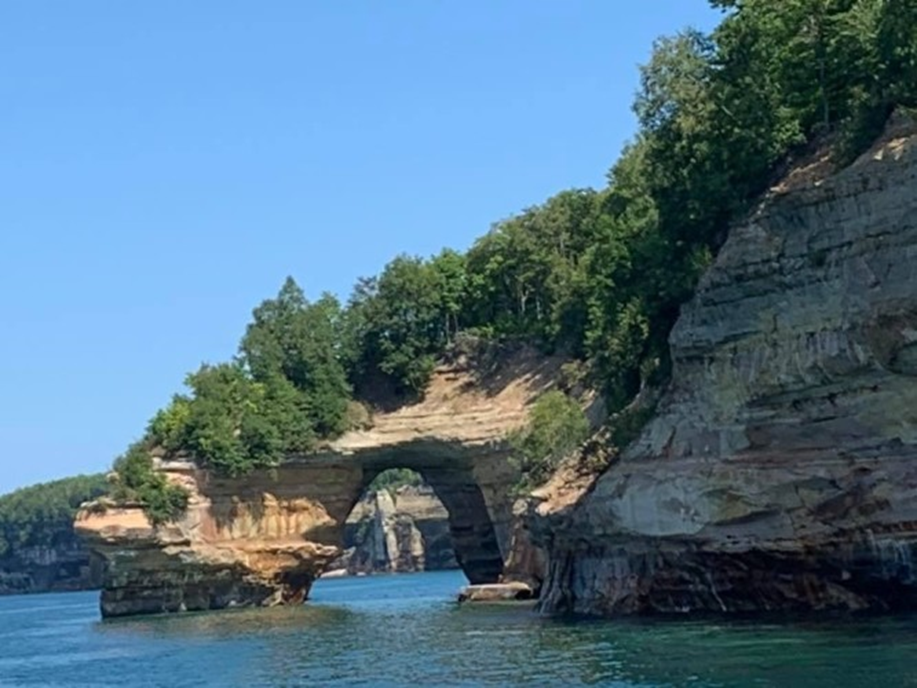 From Munising to Marquette, the group enjoyed sweet riding along the lake. Carson described his route out of Marquette as a “work in progress” but that the shoreline route to L’Anse and Baraga was good. 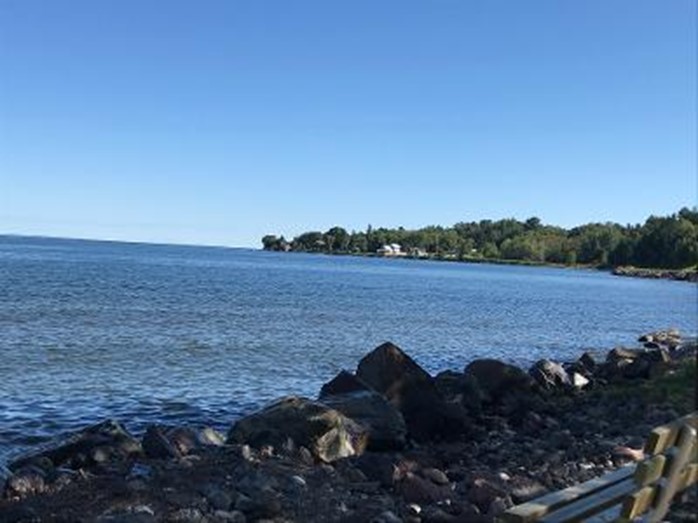 The cyclists also enjoyed an overnight at a good hotel that was right on the water. The group bypassed exploring the Keweenaw Peninsula in the interest of time, but thoroughly enjoyed a beautiful route along the southern perimeter of Porcupine Mountains Wilderness State Park. The route involved it share of ups and downs, but also was memorable for its trees in the morning sunlight. Carson, however, noted that he is not sure that the nice hotel they stayed at near the entrance to the park survived the ups and downs of COVID-19. 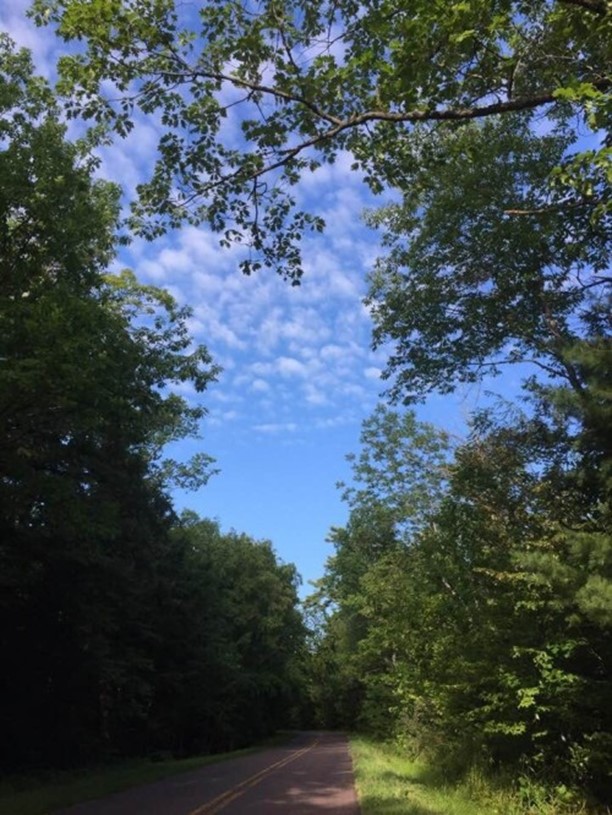 Success and Returning to Civilization

The return to busy highways, “civilization”, and completing the circle tour was now slowly coming into sight. The next stops were Ironwood, MI, an older logging town, and then Bayfield, WI, a charming village with an alpine feel, nestled into the lakeshore abutting the Apostle Islands National Lakeshore. Along with the alpine characteristics, there was a steep climb into town. The reward, however, is a choice of many restaurants and a good vantage point to view the many sailboats – in dock or plying the lakeshore. The town was one of the favorites along the route. 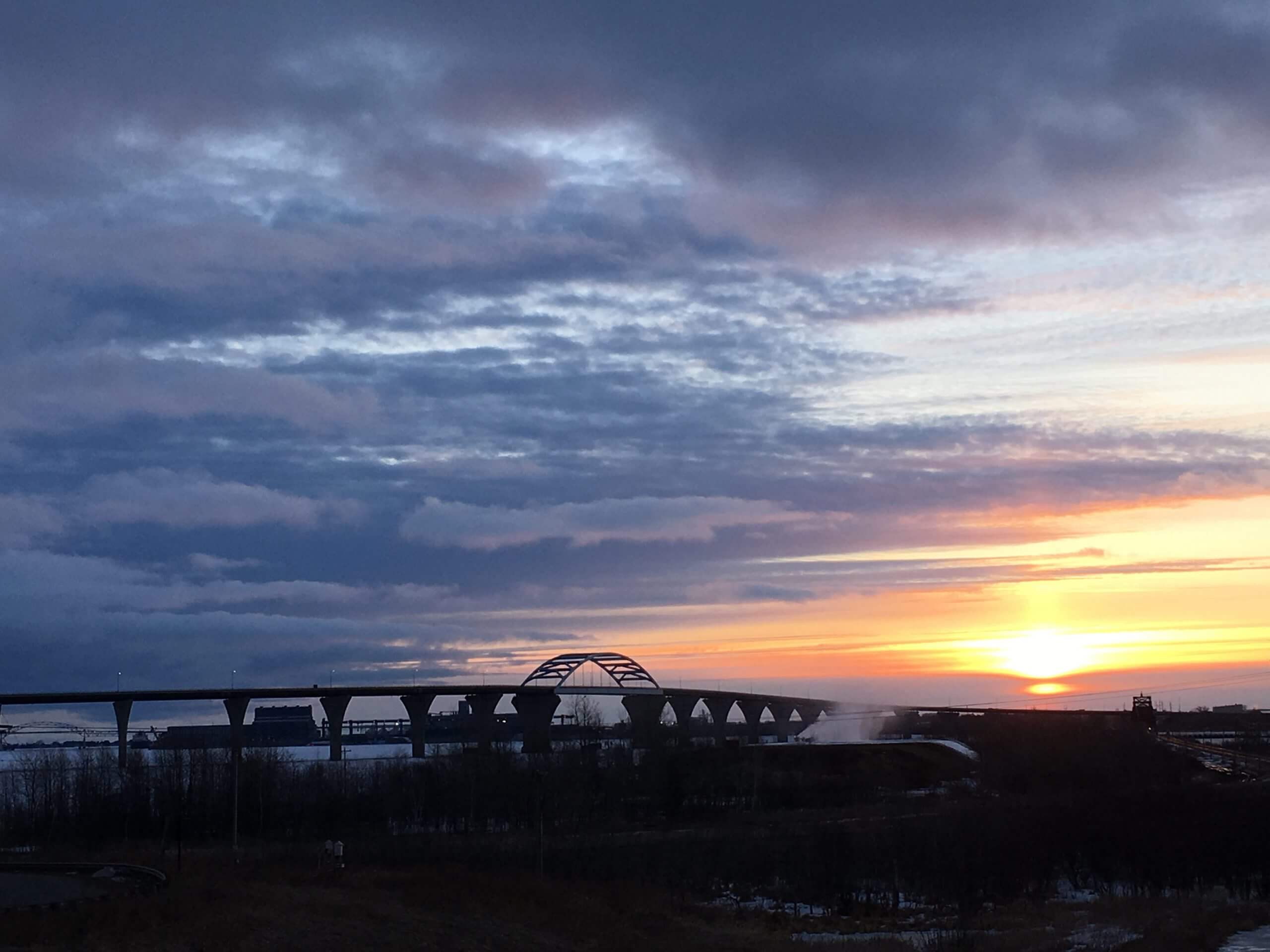 The next day, the penultimate of the tour, put the group on the lakeshore road for about 50 miles before turning south away from the lake. The riders were together for a last night near the Brule River State Forest in Wisconsin. They were then positioned for a straight shot into Superior, WI, where they crossed the Richard I. Bong Bridge into Duluth, MN to complete the Lake Superior Circle Tour on bikes in 21 days. “We all concluded at the end of our 3 weeks that we’d had a wonderful time. I slept well.” A.D. Carson 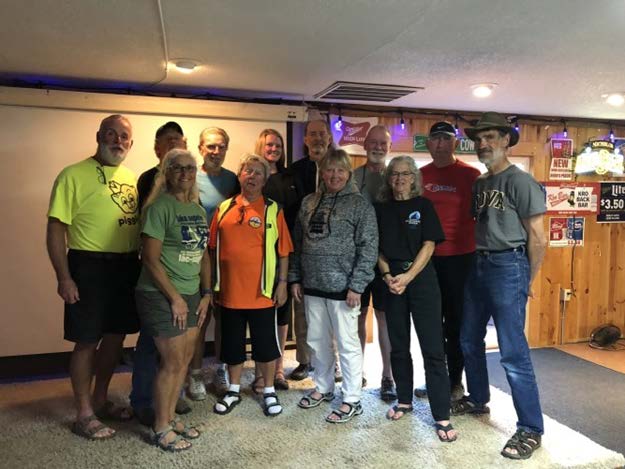 Group photo at a motel near the Brule River State Park, WI, on the last overnight of the tour – A.D. Carson

“A great tour company. We’ve played well together, we’ve enjoyed each other. More than the tour, this society of friends sharing the experience is the greatest treasure I will carry away. Thank you all, with all my heart! “ – A.D. Carson 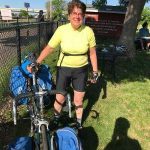 Harriet Guthertz got bitten by the long-distance biking bug as a teen growing up in Milwaukee. She started out riding her 5-speed Schwinn along the shores of Lake Michigan and up and down the glacial moraines of rural Wisconsin. Now, 50 years and many bikes later, she is still going strong, having circumnavigated three of […]