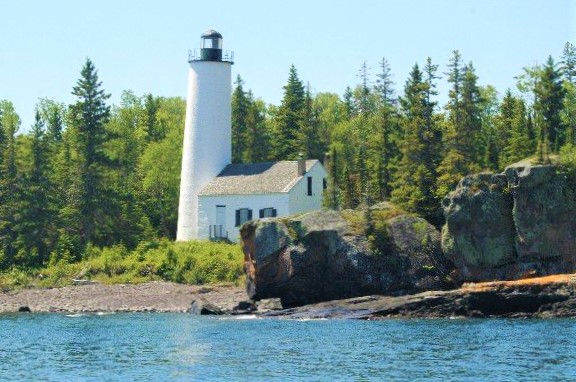 Rock Harbor Lighthouse is located on Isle Royale National Park in Michigan’s Keweenaw County. The lighthouse was built in 1855 and was the first of four lighthouses built at Isle Royale. It is situated at the southwest entrance to Rock Harbor. Standing 50 feet (15 m) tall, this round white brick tower with black lantern is the most visited lighthouse on Isle Royale. The attached light keeper’s house currently serves as a museum. The light hasn’t been in operation since 1879 and was listed on the National Register of Historic Places in 1977.

Travel to: Visitors to Isle Royale National Park must arrive by boat or seaplane. There are transportation services that depart from Houghton, MI, Copper Harbor, MI, and Grand Portage, MN.