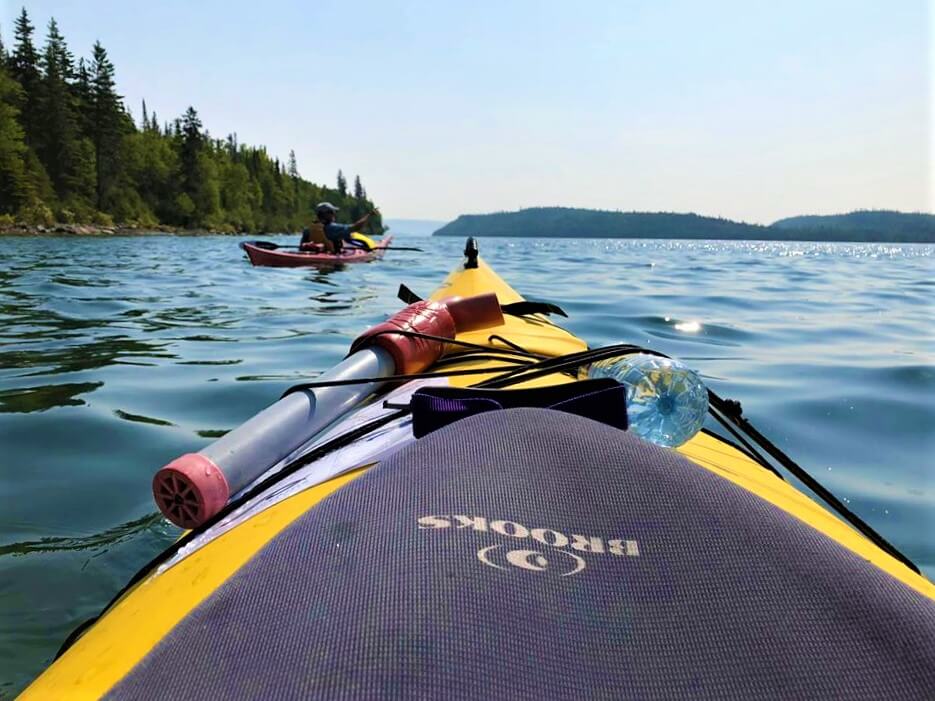 Many things intrigue those who visit Ontario’s Superior Country from the beautiful Northern Lights to the adrenaline rush of ice climbing but one thing that holds the most magic and mystery is our beautiful Lake Superior. Although the tales of what has taken place along Superior’s shores are endless, we had the pleasure of learning about some of them paddling on a guided kayaking tour with Superior Outfitters and Parks Canada. 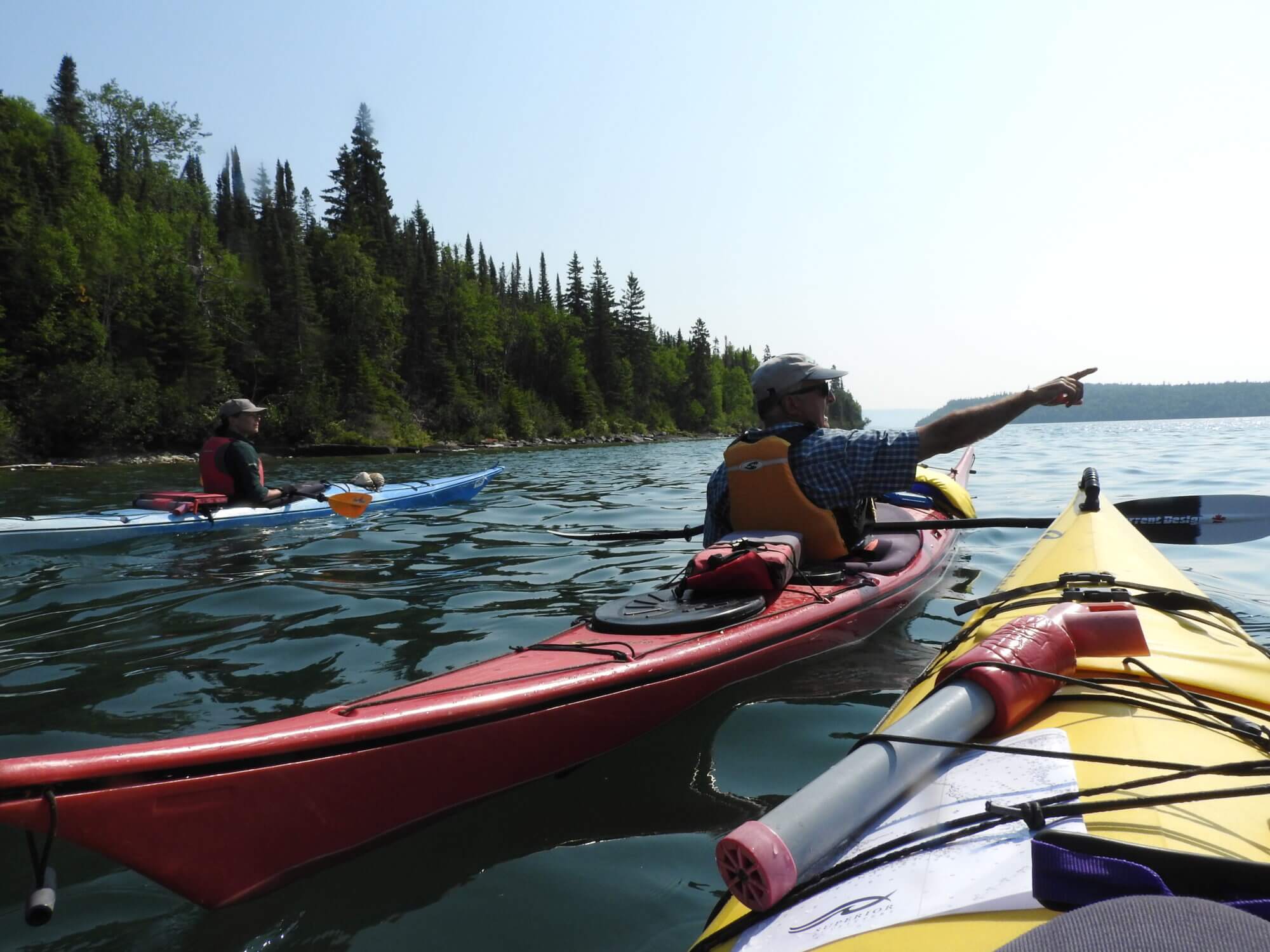 Parks Canada and Superior Outfitters partnered up to bring “Rossport Fish Tales: A Sea Kayak Safari”, where they took participants on a guided kayaking tour and provided them with a lot of interesting information about Lake Superior. Superior Country’s Executive Director Dan Bevilacqua and I took on Lake Superior for our first paddling adventure. 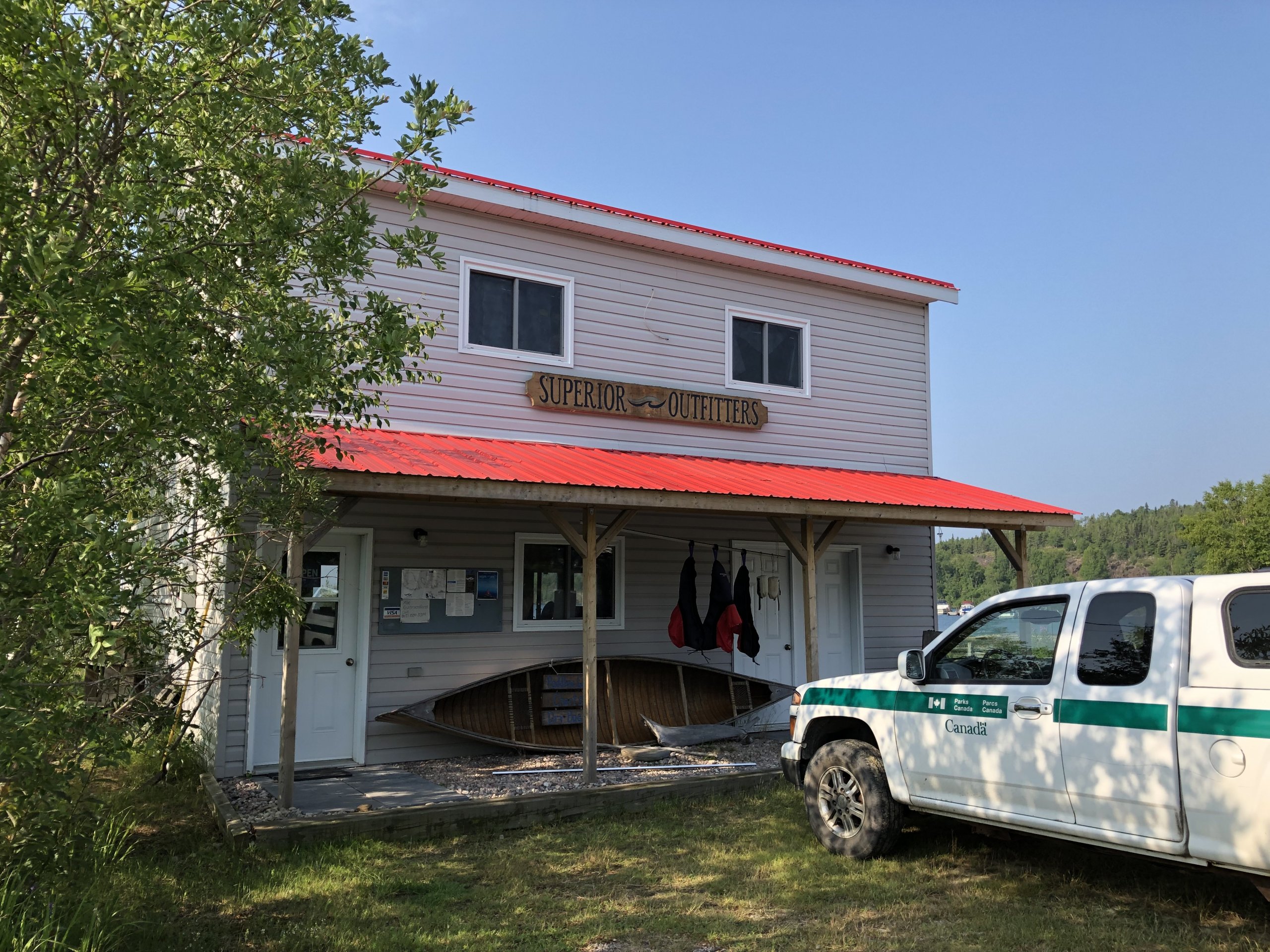 It all began with us stepping into the Superior Outfitters building to sign the proper paperwork, and from there we headed out to the dock. Dave (Superior Outfitters) and Nicole (Parks Canada) helped to assist us in our kayak, which I think turned into more of a comedic morning show for the residents of Rossport. We were informed that, instead of owning televisions, they look out their windows to the docks for daily entertainment and we did not disappoint! Once Dan and I were steady and sitting in our kayak we paddled around the dock to get a feel for it and waited for Dave to round up our lunch and pack up for the journey. 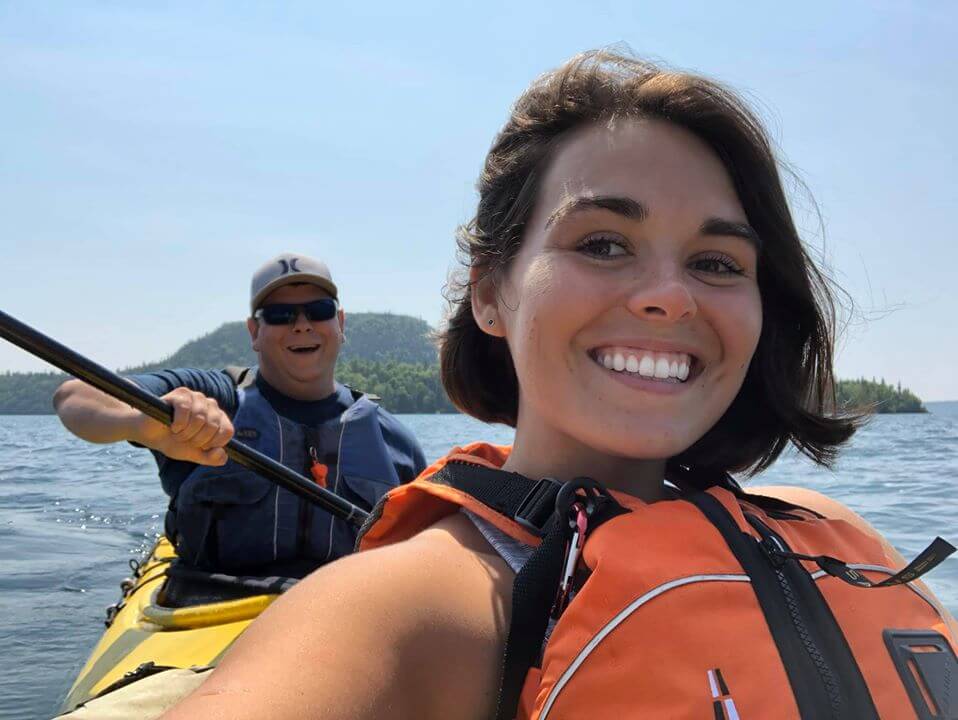 Dan and I joked a lot about getting lost, tipping over, or splashing each other, but I was very impressed with how steady and safe I felt for being a first-time kayaker. That’s when the excitement began to hit me as we were sitting in Lake Superior on a beautiful, warm, sunny summer morning about to paddle ourselves to an island! I couldn’t get over how perfect the moment was. Once Dave was all packed up and on the water himself, we then paddled out to the left and beyond Nicol Island which also has road access, some beautiful B&B’s, and Island Pottery. We stopped a few times for different stories and some interesting facts, such as when we saw the amazing Butterwort flowers which are flowers native to arctic and alpine environments and even our very own Superior. They are carnivorous plants, and it is believed that these cold climate plants are here as a result of the last glaciation. After sitting there in amazement from learning about all these unique aspects of Lake Superior we continued our journey and safely made it to Healy Island. 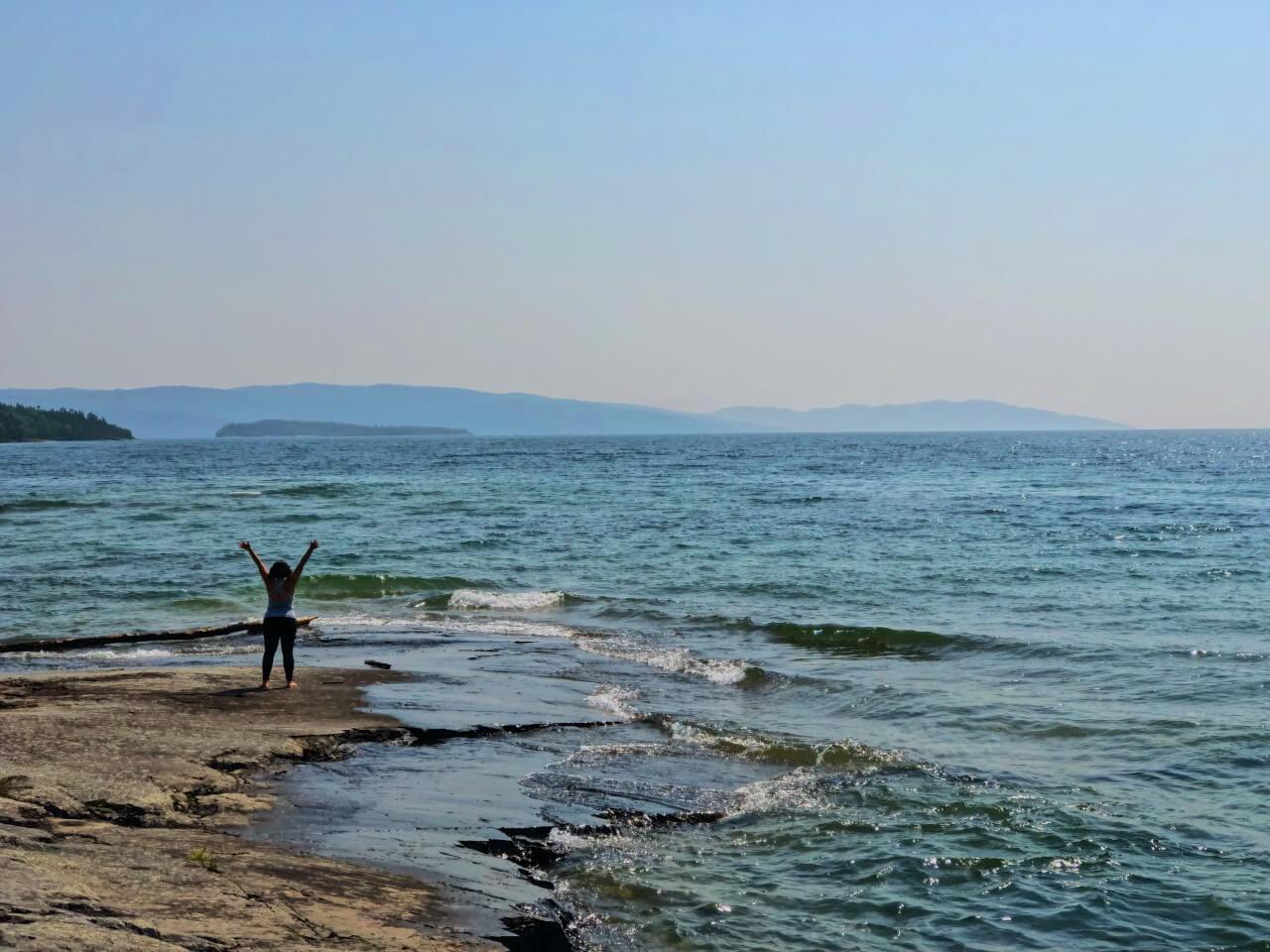 Healy Island was a paradise! As we approached, we saw a beautiful sandy beach and several rock formations. We landed on the shore and began exploring. We ventured to the tip of the island, and it sure didn’t disappoint. The views of Lake Superior were spectacular. You could see for miles and feel the cool breeze off the water, while witnessing the powerful waves of Superior in the distance.  We had our delicious lunch from the Serendipity Cafe– a local Rossport restaurant hotspot, took lots of photos, and heard a few more stories. 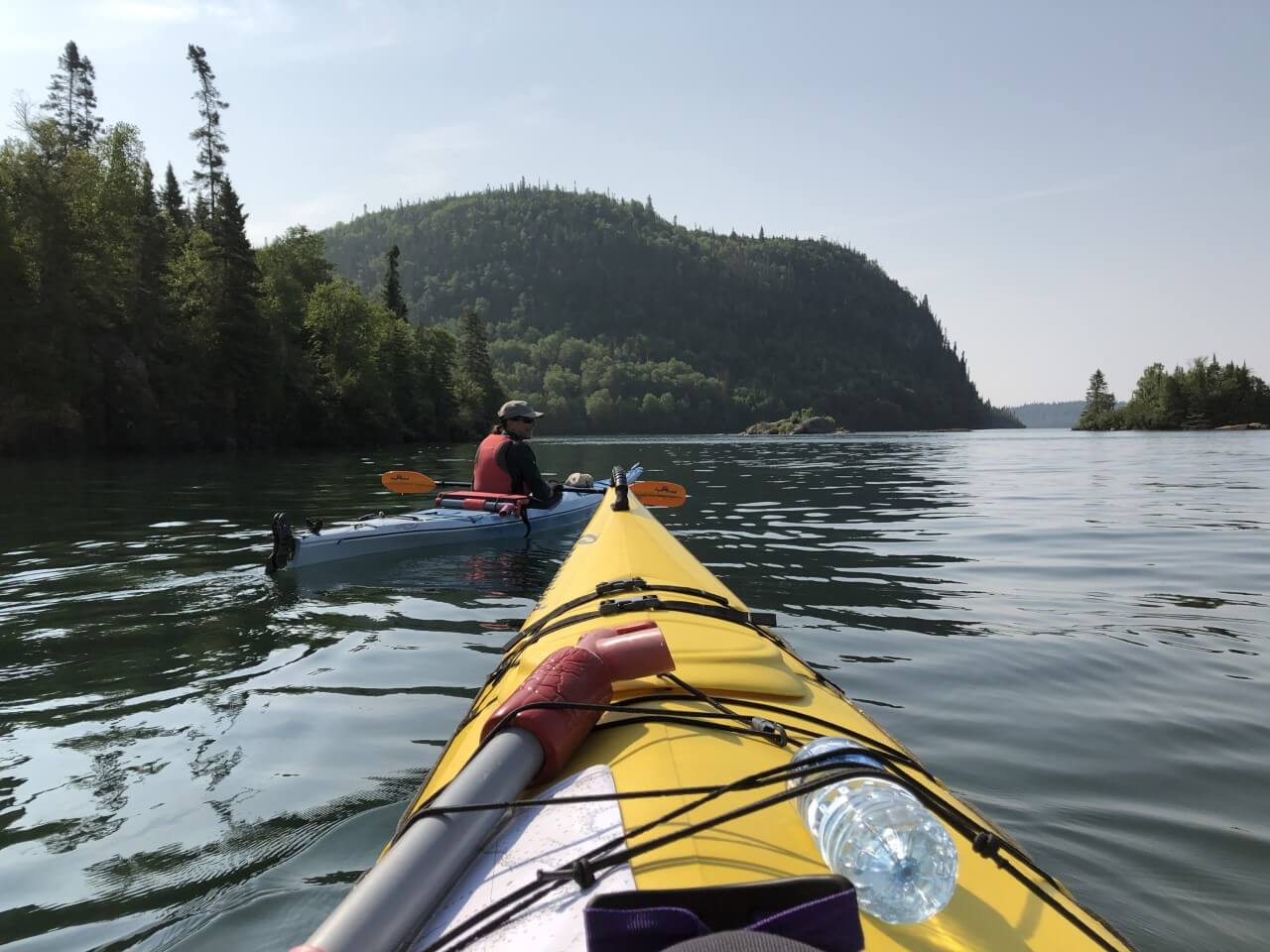 One of our favorite stories was of the famous Gunilda shipwreck. It is said that this is the best-preserved shipwreck in the world. This fascinating tale sounded more like a treasure hunt than anything else. We heard of countless individuals attempting to access the wreck due to the alleged wealth it tightly holds at the depth of Lake Superior. 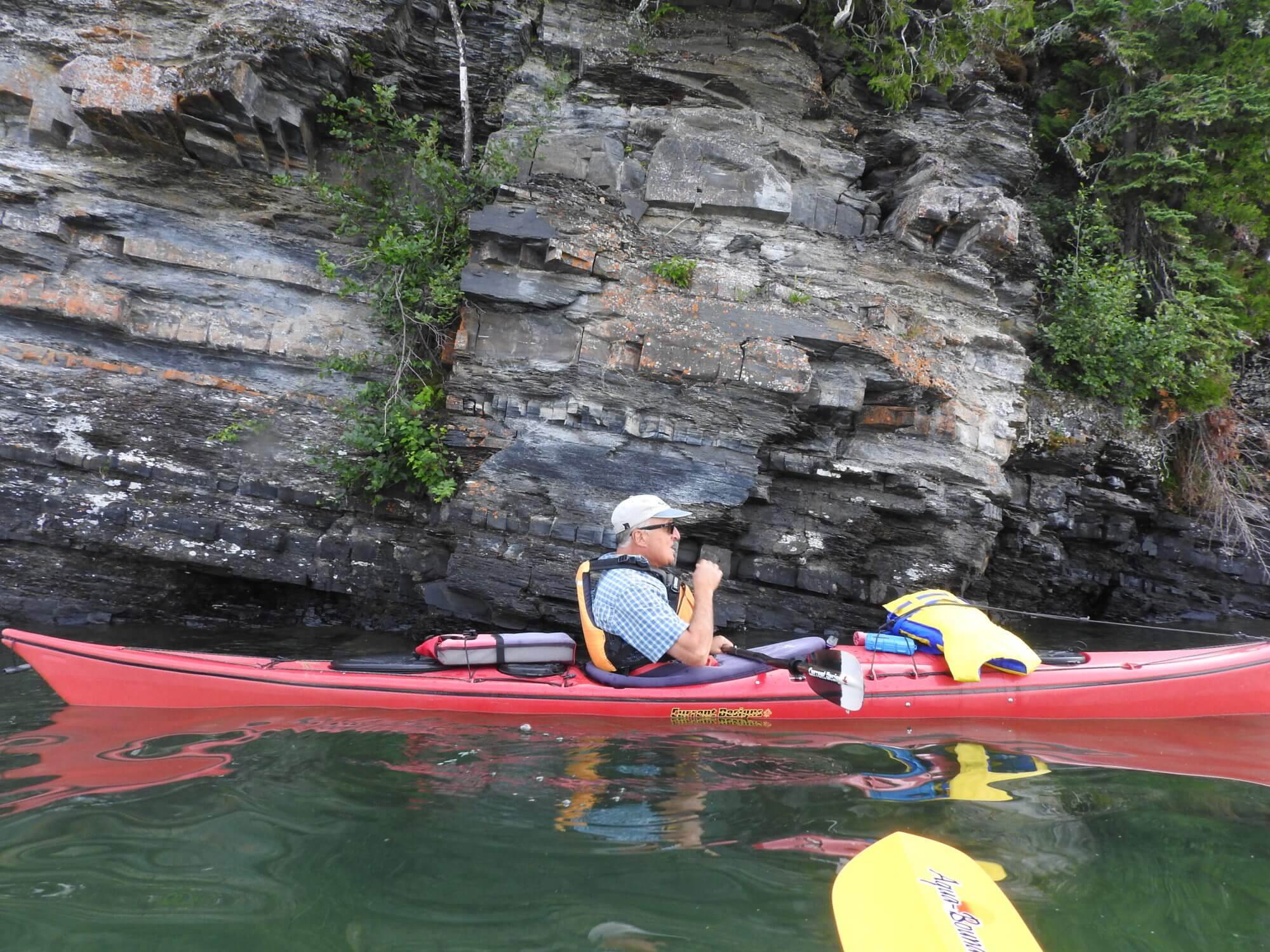 We were also told that this area of Lake Superior would become the Lake Superior National Marine Conservation Area. This Parks Canada Site will soon be established to protect and conserve the area and over 600 of its islands. This was extremely interesting as Parks Canada works extremely hard to connect residents and visitors to Lake Superior. Through their involvement in this kayaking adventure we could not help but feel that they accomplished their mission. Not only did we learn a lot of the region but also about some of the threats Lake Superior face and how we could help protect it. 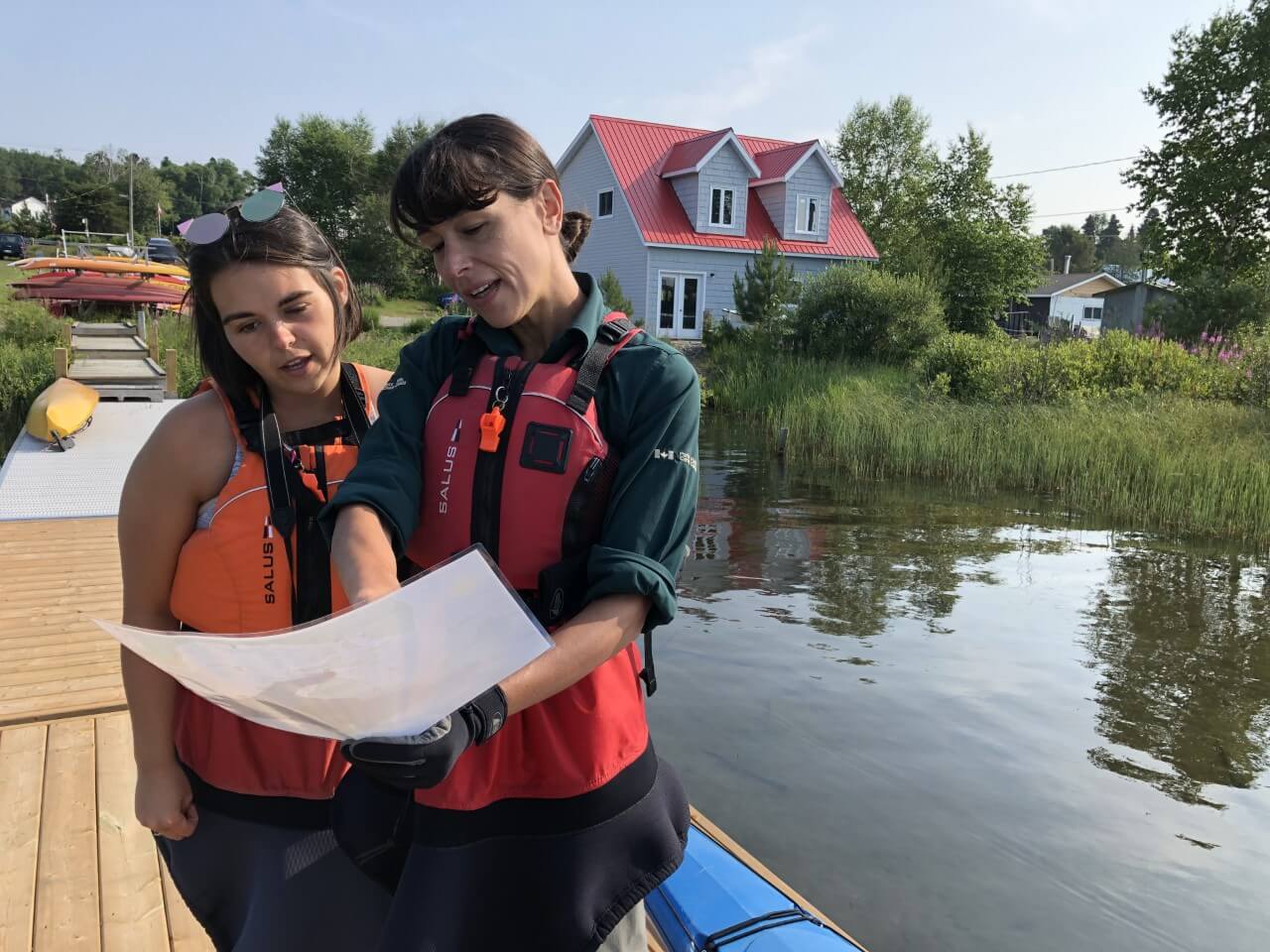 As we returned to the mainland we were once again in awe. The paddle out from Rossport was spectacular as the scenery showcased the vastness of Lake Superior and the surrounding islands. The paddle back was completely different. It was extremely satisfying to view the mainland from the water as it offered us an entirely different perspective. During our daily lives we often look out toward the Lake in wonder but looking back toward the mainland gave us a great sense of pride and accomplishment. 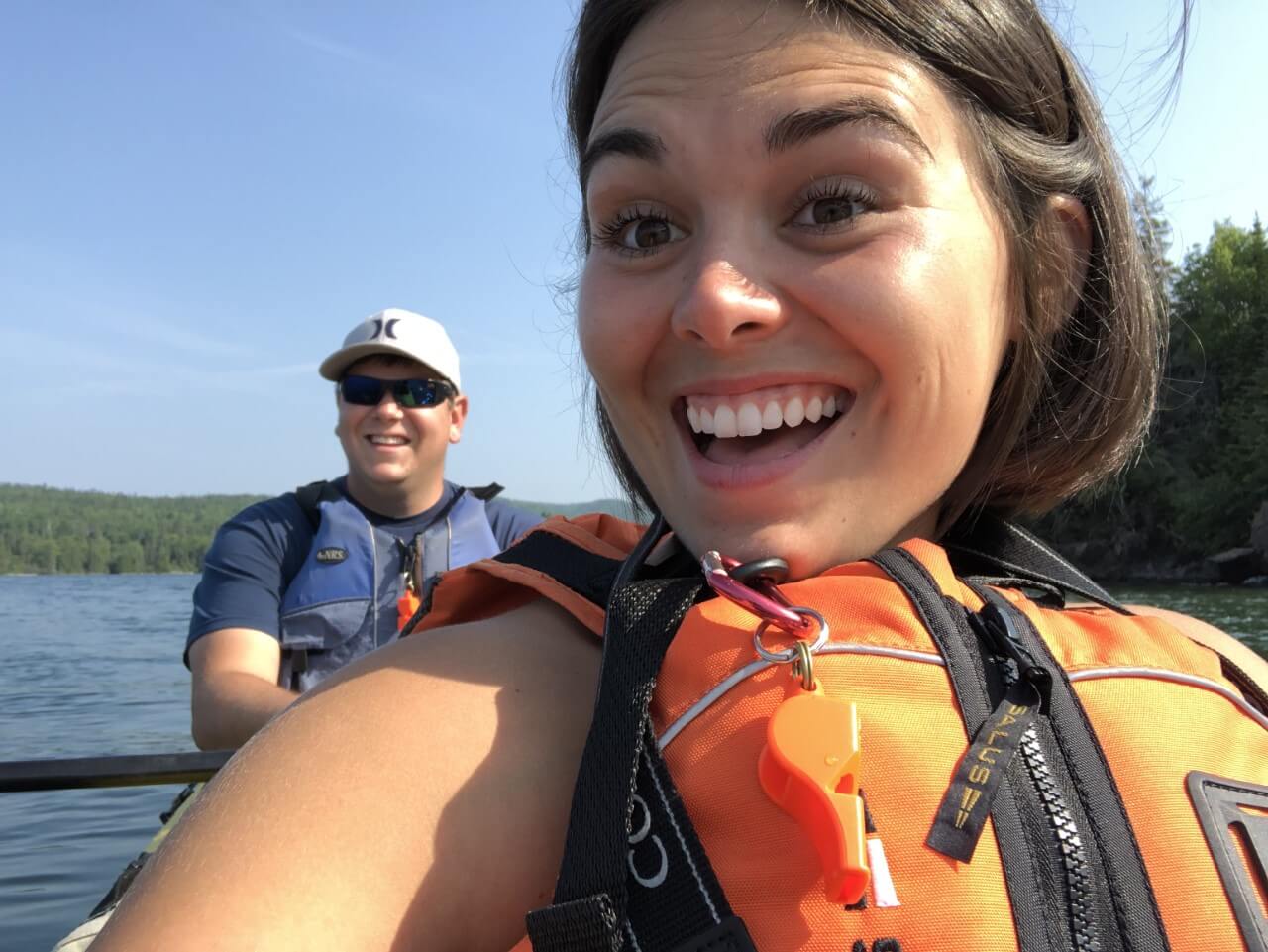 As a North Shore local, I was almost embarrassed to have never done anything like this before, especially when I realized how much I LOVED every minute of it. It was the perfect day, the weather was warm, the company was great, and the scenery was breathtaking. The trip, from leaving the mainland to returning, was 4 hours. It was the perfect amount of time for us as we have never kayaked before but wanted to get a true paddling experience. Our guides made us feel extremely safe and comfortable and were very knowledgeable about Lake Superior and the region. 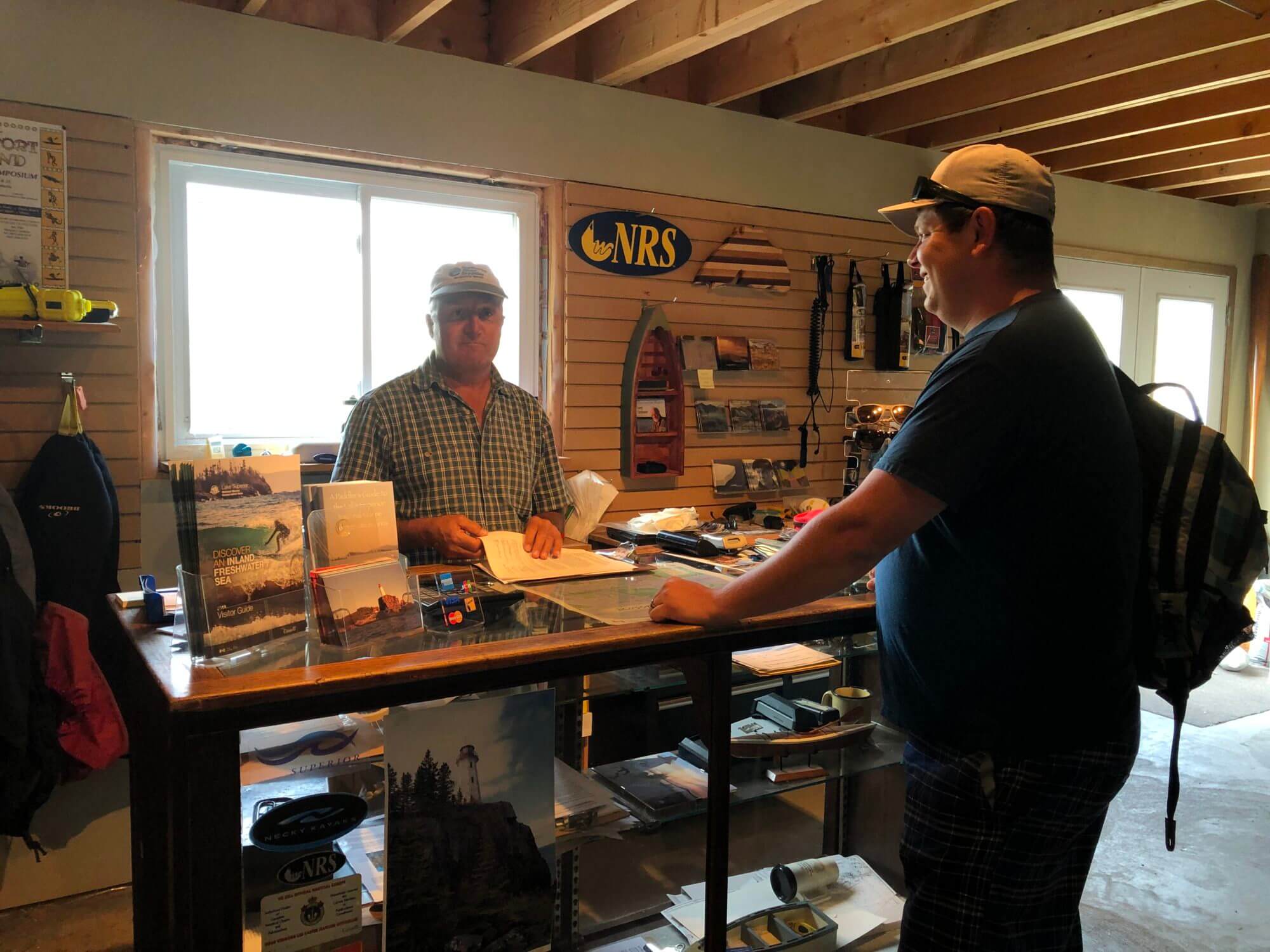 If you are someone who loves the outdoors, Lake Superior, paddling, or all three, I highly recommend an excursion like this.

What you should bring?

Whether you’re an expert paddler or a beginner, a guided kayaking tour is perfect for anyone! Lake Superior is extremely beautiful and filled with so many interesting stories, wildlife, and views everyone should experience a tour like this. Parks Canada offers many unique programs for all ages and interests. They can help you discover the beauty and history of Lake Superior National Marine Conservation Area and the surrounding region. For more information on all their programs, visit parkscanada.gc.ca/lsnmca-activities 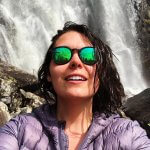 Casey is an avid outdoors adventurer and is always looking for the best Instagram worthy photo opportunities along Lake Superior. She spends her free time hiking and exploring the great outdoors!