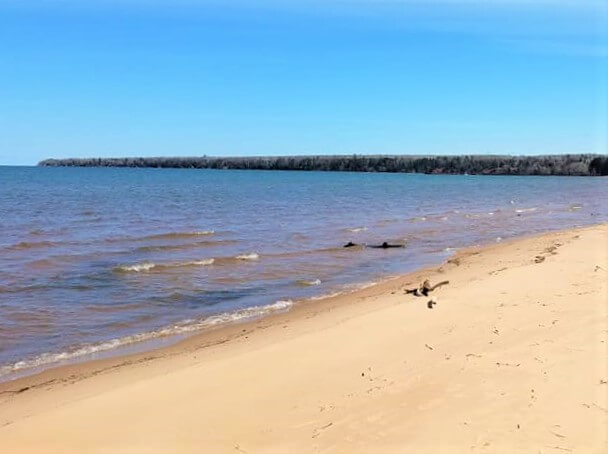 Cornucopia Beach is located in Cornucopia in Wisconsin’s Bayfield County. This is a sandy beach on the shore of Lake Superior’s Siskiwit Bay. This is a great place to swim due to the shallower in the bay. There is an artesian well where you can fill your bottles with refreshing spring water. Visit the Cornucopia Green Shed Museum next to the beach as well as old historic tug boats. There is a marina for docking and launching and shops with fresh smoked fish and pottery.

There is a sign at the beach that reads “Tragedy of the Siskiwit. Once upon a time, according to an old Indian legend, the sand beach on the east side of this bay was a favorite camping ground. One spring a few lodges of Chippewa from La Pointe encamped here. When their chief, Bi-aus-wah, returned from the hunt, he found that a large party of Foxes has murdered all but two of his people. He trailed the enemy to their village and found them preparing to torture his young son. Chief Bi-aus-wah stepped proudly and boldly forward and offered his own life if the Foxes would release his young son, whose “tender feet had never trodden the war path.” Fearing the consequences if they refused so noble an offer, the Foxes released the son and burned the father instead. The son returned to his relatives at La Pointe, and his story brought quick and decisive revenge.”