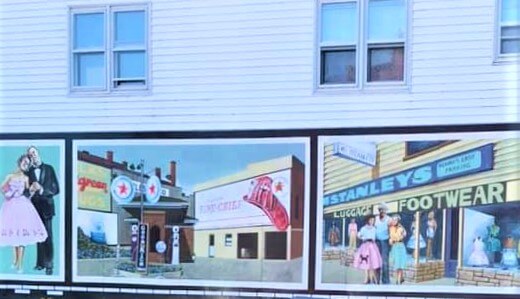 The 1950’s Snapshots Mural is located in Ashland in Wisconsin’s Ashland County. Ashland is known as the “Historic Mural Capital of Wisconsin”. This mural was painted in 2007 and is part of the Ashland Mural Walk. These “snapshot” murals depict various scenes from the 50s including the store fronts such as the Texaco Gas Station, the Phillips 66 Station, an ice cream shop and Stanleys store as they were in the era. Famous people during the era are also depicted including Bing Crosby, George Reeves, Lana Turner, Perry Como and Rosemary Clooney. Guided mural trolley tours are available in August where you can see and learn about the history of each vibrantly illustrated mural. There is also a Self-Guided Mural Walk Tour Book available at the Ashland Historical Museum.