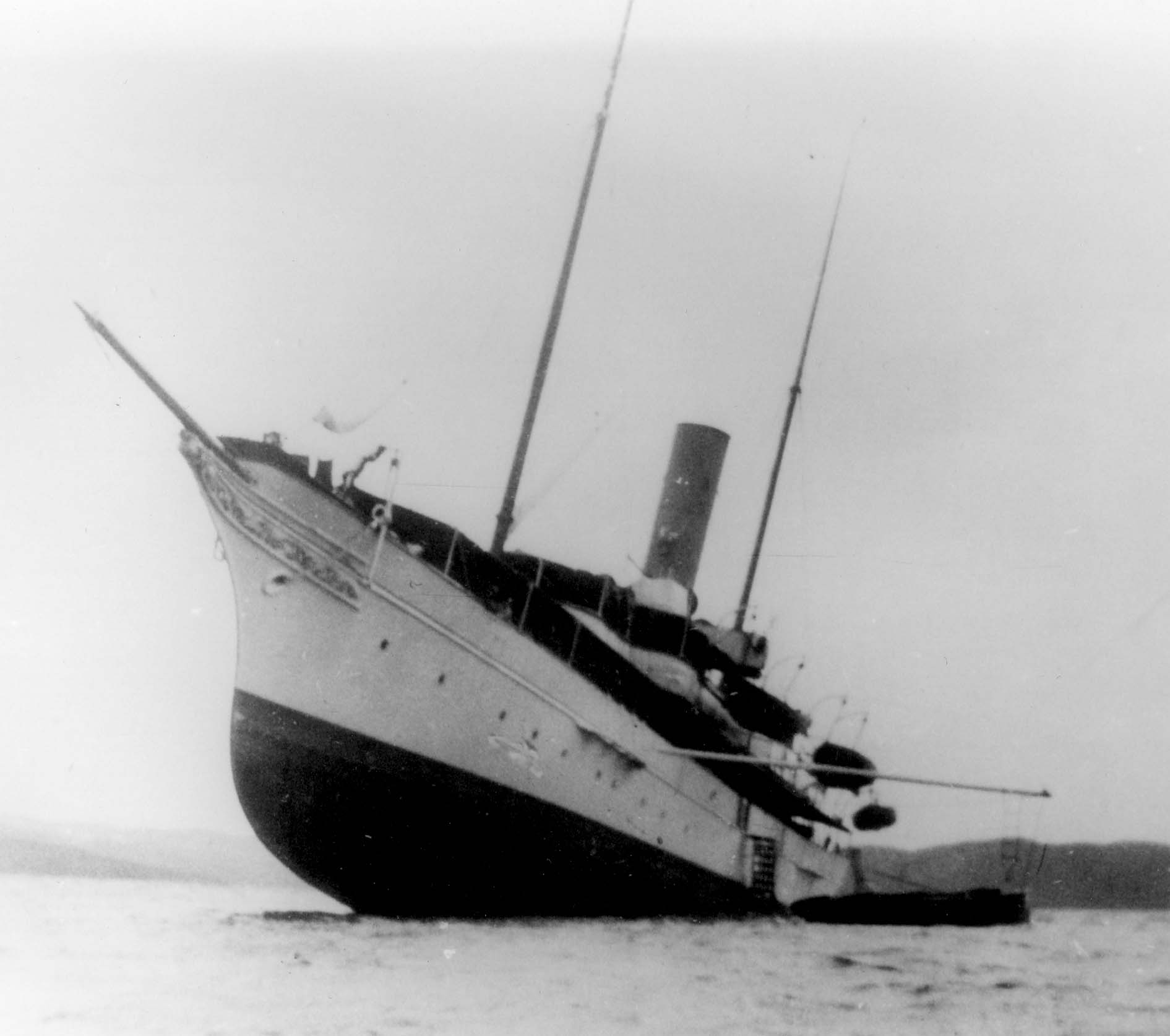 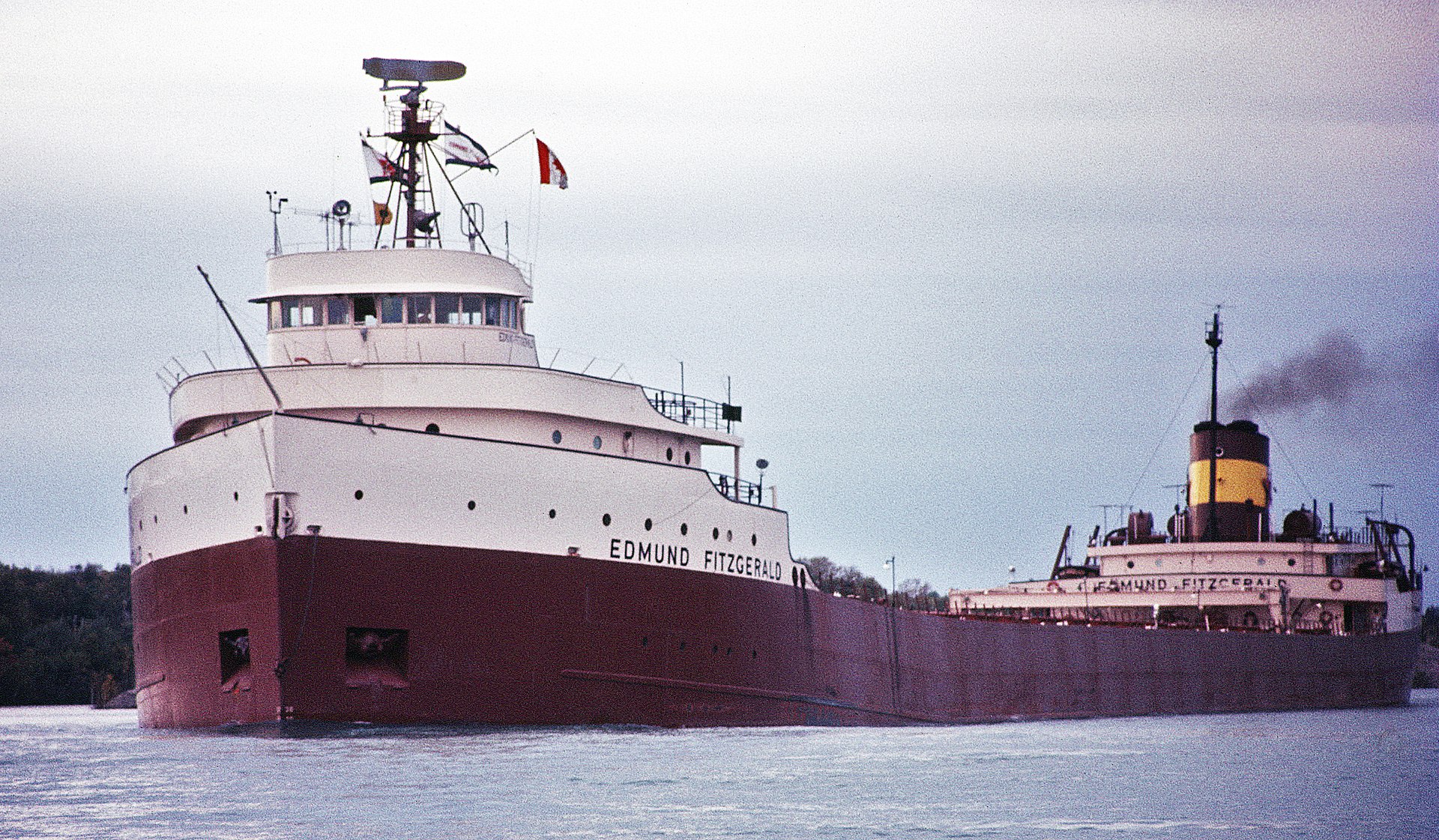 The most famous of the Lake Superior Shipwrecks because of its sheer size and power. It is the largest ship to ever sink in Lake Superior. It sank on November 10th, 1975, during a raging storm. There were no survivors, 29 lives were lost.  There have been many theories on how the ship sank, but there is no conclusive evidence to this day to determine the cause of the sinking. On July 4th,1995 the Great Lakes Historical Society conducted an exhibition along with the National Geographic Society, Canadian Navy, Sony Corporation, and the Sault Ste. Marie Tribe of Chippewa First Nations. This expedition resulted in the recovery of the Edmund Fitzgerald 200-pound Bronze Bell. A replica bell with the names of the 29 men engraved on it, replaced the original bell on the shipwreck. The original Bell is permanently displayed in the Great Lakes Shipwreck Museum at the Whitefish Point Lighthouse. In January 2006, the Ontario Government put a 500-meter (1640 ft.) area around the shipwreck, protecting it as a “watery grave”.

The May Flower is the oldest known shipwreck in Lake Superior. It was a wooden hulled scow schooner built in 1887 in Sturgeon Bay Wisconsin. The ship sank on June 2, 1891. It was carrying sandstone blocks from Portage Michigan to Duluth Minnesota. The wooden ship capsized in poor weather conditions just a few miles away from the harbour entrance. The remains were discovered in 1991.

This is the deepest shipwreck found in Lake Superior. The Scotiadoc was a dry bulk freighter that carried iron ore, coal and grains. Originally named Martin Mullen and renamed Scotiadoc when it was purchased by Paterson Steamships in 1947. It sank on June 20th, 1953 when it collided with the Burlington Ship by Trowbridge Island, near Thunder Bay Ontario. It was said to be a day of heavy fog and poor weather conditions. Shipwreck hunters (divers) discovered the wreck in 2013. It lays at a depth of 850 feet (260 meters).

The S.S. Bannockburn- AKA “The Flying Dutchman of Lake Superior”

This was a steel-hulled freighter that disappeared on November 21st, 1902. It is a mystery still; nothing has ever been found of the ship or its crew. It simply vanished. This shipwreck was lost in the middle of Lake Superior with 21 crew members on board. It left from Thunder Bay heading to Sault Ste. Marie. It was hauling grain. On November 20th, 1902, one day before her final voyage, the ship ran aground shortly after leaving Thunder Bay. It turned back to port to check for damage. After no apparent damages were found, the Bannockburn ventured back out to Lake Superior. That very evening, in the middle of Lake Superior, the ship simply vanished forever. There have been many stories circling over the years about this ship. There have been sightings of the ship during winter storms, and crews have even mentioned seeing the dead on its ship deck. The legendary sightings of this ship and having ghosts and skeletons spotted upon it have earned it the nickname of “The Flying Dutchman of Lake Superior”.

This was a steel-hulled American lake freighter. It was built in Chicago in 1907. It was originally named the ‘Salt Lake City’. It was renamed ‘Chester A. Congdon’, after the prominent lawyer and entrepreneur in Duluth. He is widely known for his home, the Historic Glensheen Mansion and Estate in Duluth, Minnesota (now owned and operated by the university of Minnesota-Duluth). Make no mistake, this famous millionaire entrepreneur knew a good business investment when he saw one. This freighter ship was a good more for him, but no one could predict that it would run aground on November 6th, 1918 after leaving Thunder Bay Ontario with 380,000 bushels of wheat. The ship encountered thick fog and ran aground on the southern end of Canoe Rocks on the northeast point of Isle Royale. On November 8th the ship broke in two and officially sank. It was the largest financial loss on the Great lakes up to that point.

This was a freighter ship. It sank on December 7th, 1927, only 3 years after its launch. It was last seen moving toward the Isle Royale. There were no survivors. The ship lost the entire crew of 22 people. The shipwreck wasn’t found until August 21st, 1977. It is located northwest of Isle Royal. This shipwreck is notable because it is a mystery. No one knows just how exactly it sank. For 50 years it was a mystery as to where it sank and what happened. It was as though it had vanished like a ghost. Since it has been found it has become a popular diving site. Some divers have reported eerie feelings when diving around the shipwreck. Ghost stories remain a popular theme around the S.S. Kamloops.

This was known as a luxury Yacht, built in 1897. It sank in Lake Superior on August 11th, 1911, by McGarvey Shoal near Rossport Ontario. A series of poor choices brought this luxurious yacht to the bottom of Lake Superior. The Gunilda was owned by William L. Harkness of New York. He chose not to hire a pilot (for a low fee) to guide his ship through the islands and shoals of the Rossport area on Lake Superior. The yacht hit rocks because of Harkness’s own navigational error. All the prestigious passengers where safely brought to shore. Harkness then refused to pay the fee for an icebreaker tugboat to assist in stabilizing the yacht. When it was finally pulled off the rocks it filled with water and the Gunilda sank in 280 feet (85 meters) of water.

This was a Canadian freighter ship that carried grain, iron ore and coal. It was built in 1911. After leaving Thunder Bay Ontario with a load of iron ore, the S.S. Emperor headed for Ohio. The ship ran aground on Canoe Rocks on the northeast point of Isle Royale, June 4th, 1947. There were 21 survivors. 12 crew members lost their lives.

This was a steel-hulled freighter built in 1906 in Ohio U.S.A. The ship became lost near Marquette Michigan on the 9th or 10th of November, 1913. It was carrying a load of iron ore. There was a great storm that capsized the massive freighter. There were no survivors, all 25 crew members were lost. The shipwreck was discovered in 2013, 100 hundred years after it disappeared.

This boat was a class of large tugboats developed for use in the Great Lakes logging industry. On June 4, 1904, the ship sank at Knife Island. It was coming from Duluth when it was caught in a storm. The ships compass was malfunctioning which led it to crash into the rocks along Knife Island’s shoreline. All 13 people aboard were rescued.

Approximately 200 shipwrecks took place in an area between Munising Michigan and Whitefish Point. There is shoreline that does not provide any safe harbor in this area, it is known as “Lake Superior’s Shipwreck Coast”. Whitefish Point has a light house, the oldest operating lighthouse on Lake Superior, and a Shipwreck Museum. The museum honours and displays valuable historic information about Lake Superior Shipwrecks.  If you are doing the Lake Superior Circle Tour it is worth the stop to visit the many museums as well as the lighthouses around Lake Superior. Although lighthouses cannot save all ships and lives, they have no doubt helped many in disastrous weather, preventing hundreds of ships and crews from perishing. 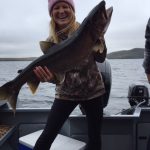 Shalane is an Ontario’s Superior Country employee who grew up in Nipigon, at the top of Lake Superior. She’s always loved the region and Lake Superior in particular.